Cebu island, the home of Baywalk Talisay homes, is the most densely populated island in the Philippines and the hub of the Visayas. Located to the east of Negros islands and to the west of Leyte and Bohol islands, Cebu is also a province in the Central Visayas region, comprising one main island and 167 surrounding islands. Its central location in the middle of larger islands gives it some protection from earthquakes and the typhoon activity that sometimes sweeps through this region.

Cebu Island is a narrow island with rugged mountains of 1,000 meters elevation, limestone plateaus and coastal plains. The island is almost 200 kilometers long stretching from north to south, and about 32 kilometers wide at its widest point. It has a tropical climate.

Cebu is one of the Philippines’ most prosperous and most developed regions, with tourism driving the robust growth of the local economy, which grew by 8.8% in 2016. Almost two million local and international visitors come to Cebu each year, drawn by the island’s white-sand beaches and stunning dive sites, especially off the island northern coast at Malapascua, and along the southwest at Moalboal.

Historic Cebu City, the capital of Cebu province, is the oldest city in the Philippines and was once capital of the country. It is a center of commerce, industry and education for the region, with lively bars, good places to eat and shop. The principal activities are shipping, furniture making, business processing services and tourism.

The Cebu Metropolitan area comprises six cities which neighbor Cebu City, which are Carcar City, Danao City, Lapu-Lapu City, Mandaue City, Naga City and Talisay City, home of the Baywalk development project. Talisay City is located only 13 kilometers away from Cebu City, a pleasant drive along the picturesque Cebu South Coastal Highway. Baywalk Talisay is indeed one of the few low-cost development projects that are located so close to prime seafront land, making this one of the most value for money investments anywhere in the Philippines!

The City of Talisay, named after the magtalisay tree that grows abundantly here, is classified as a 3rd city income class component city, with a population of just under 230,000 people in 2015. The opening of the South Coastal Highway linking Talisay to Cebu City in 2004 brought new growth impetus to Talisay, but the city remains a low-key and quieter place than the bigger Cebu City, and this makes it an attractive zone for residential developments.

The city’s commerce is concentrated in the Tabunok area, with public markets, strip malls and other commercial establishments are located. Residents in Talisay can shop for fresh meat, fish and vegetables as well as other household necessities at the popular public markets here. For families with schoolgoing children, Talisay is an especially attractive area, with 5 kindergartens, 20 public and private elementary schools, 20 public and private secondary schools, 3 colleges and 5 seminaries located in this town alone.

Some of the schools located near Baywalk Talisay are:

Some of the markets located near Baywalk Talisay are:

Some of the malls include:

Hospitals near Baywalk Talisay are located closer to Cebu City, a convenient half-hour’s drive away. These include:

For worshippers, there are many places of worship located near Baywalk Talisay, including:

Cebu island, being a resort island that is a firm favorite with local, regional and international travelers, certainly has its fair share of beautiful picturesque spots and tourist attractions, ensuring that you will never run out of interesting places to visit on weekends and holidays with family, friends and loved ones. Nearby Mactan is also a haven for diving, swimming, snorkeling and cultural activities.

Some of the places of interest near Baywalk Talisay include: 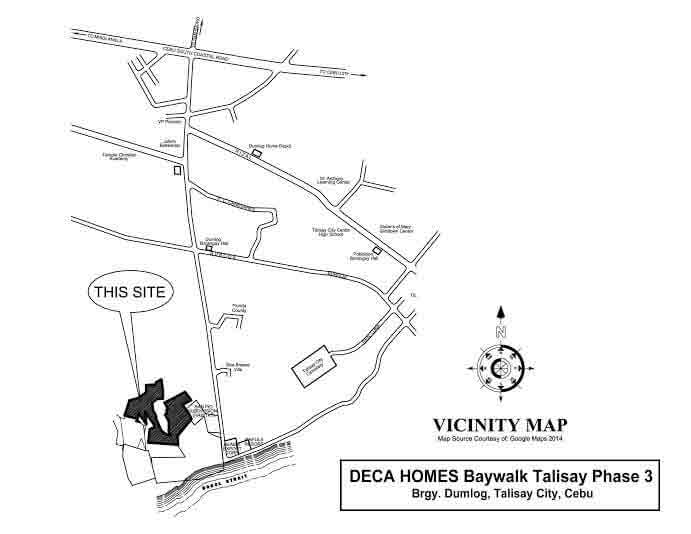